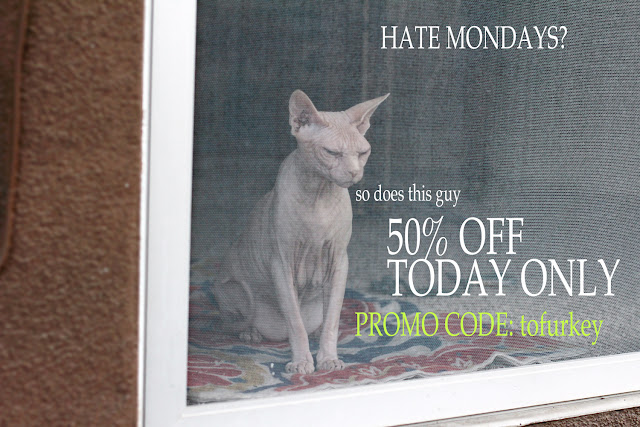 so we're having our first SALE over at the ol' etsy shop...
and it's a BIG one!

yes, you're reading that correct, half off everything in the store.  one day only. 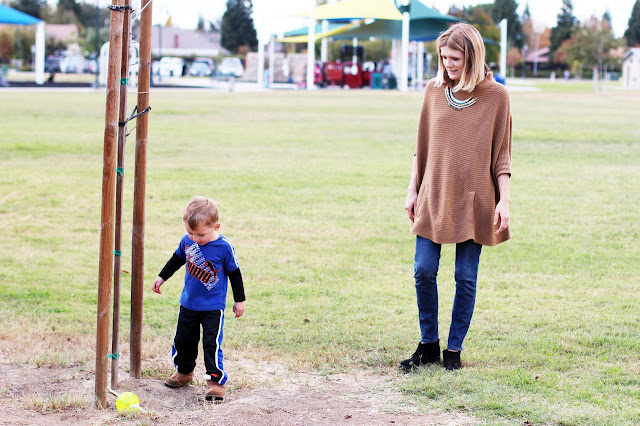 we're loving all of our nieces & nephews, keep 'em comin' ;)
nate's sister & brother in law came to visit us in fresno for the weekend. we hung around the house, playing BS, talking & chasing the kids, most of the time. we went to a playground, where the ground was made of shredded recycled tennis shoes. so green, right?! i played a mysterious soccer kickball game with judah :) 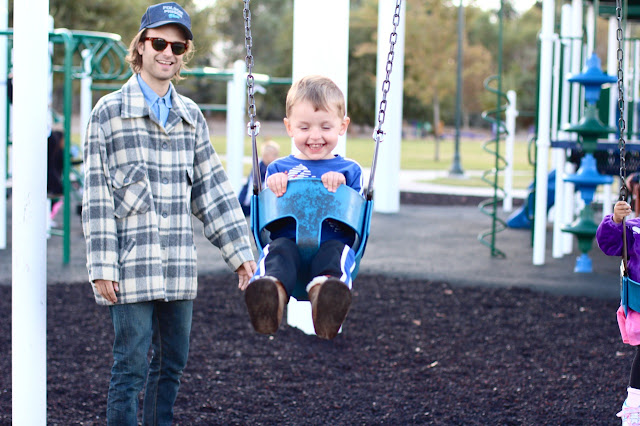 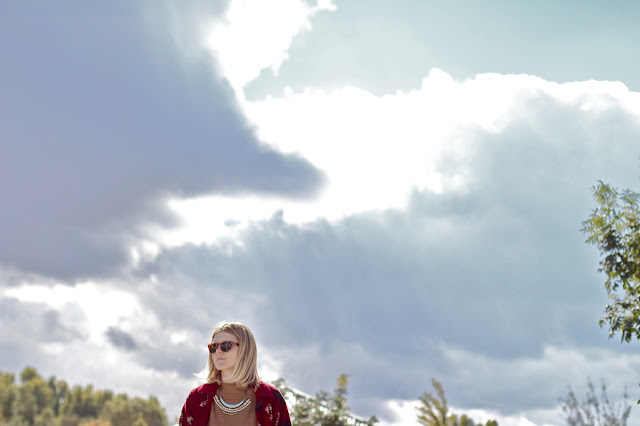 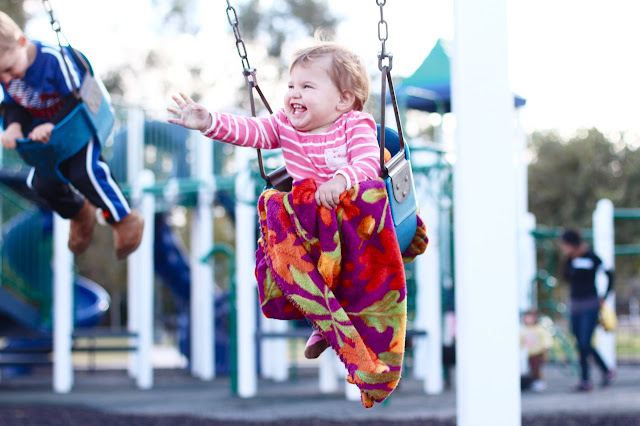 have you ever seen a happier baby on a swing before? i haven't! sweet cheeks izzy loving every second of it :)
at 2:49 PM 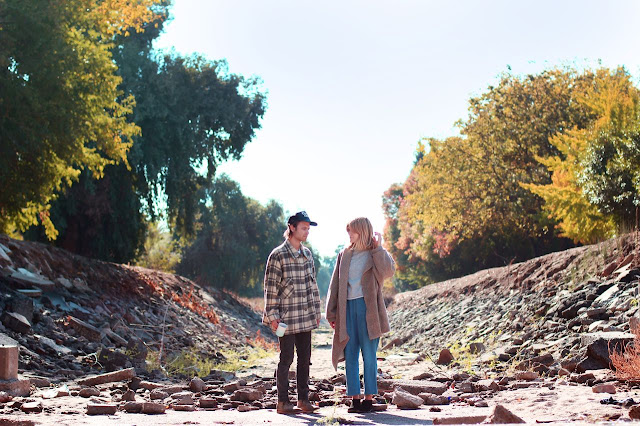 it's finally starting to look more like fall here. we went on a morning walk today, brought our coffee & talked about how we would do this everyday if we had a dog. but quickly decided against it. i also brought a carrot in case our neighbor's horse would be hanging out in the backyard. but she wasn't, so i threw the carrot over the fence anyway. if i was a horse & i found a carrot in my backyard one day... i'd be pretty happy horse.
at 11:21 AM

i normally post photos that either nate or i take, but these photos i just saw, of  grandma misa and her best friend cat fukumaru *tears* were so beautiful, i just had to share! you can see more here 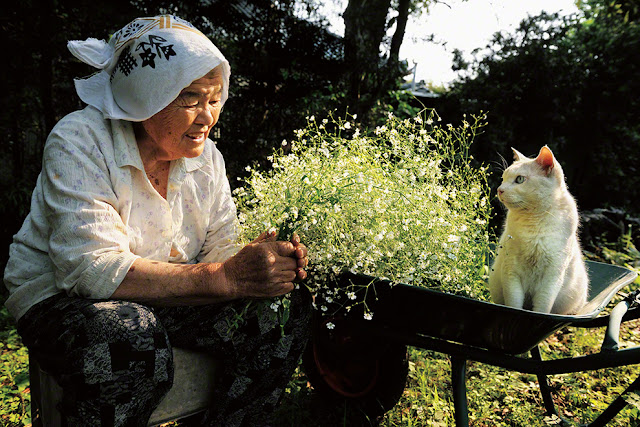 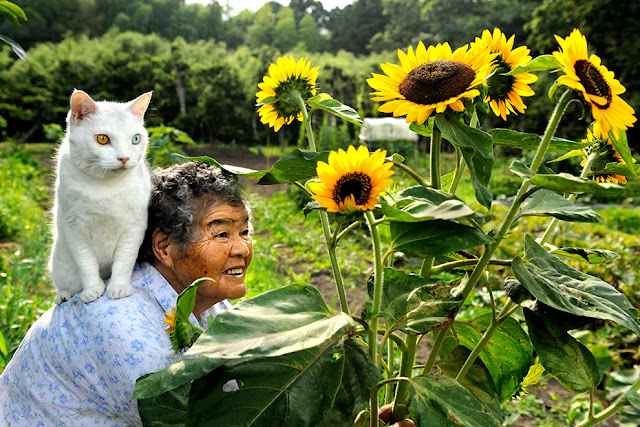 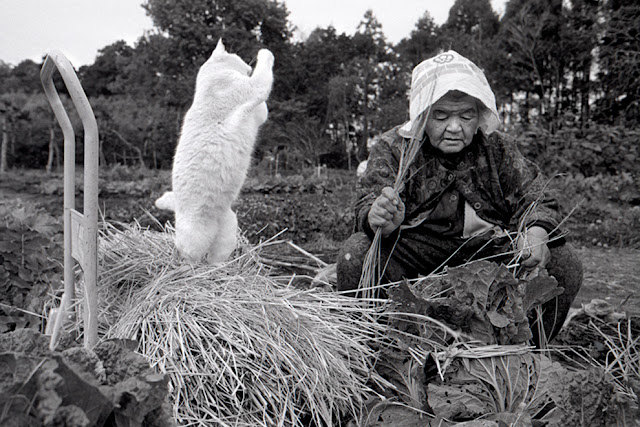 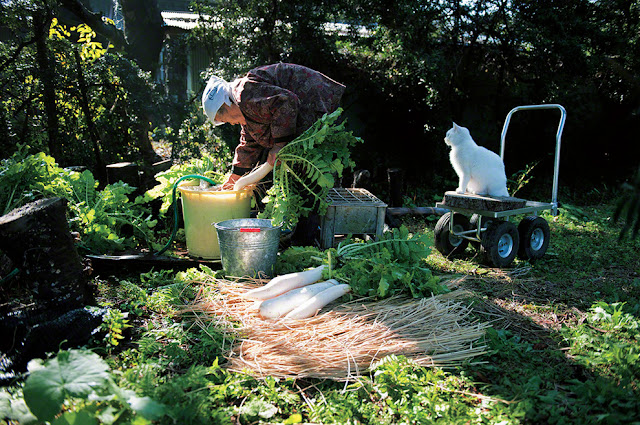 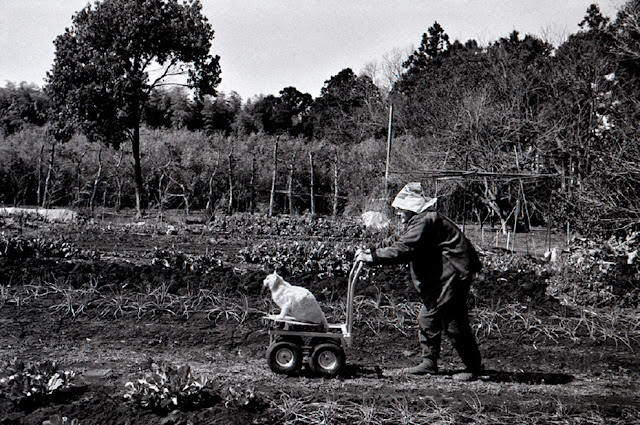 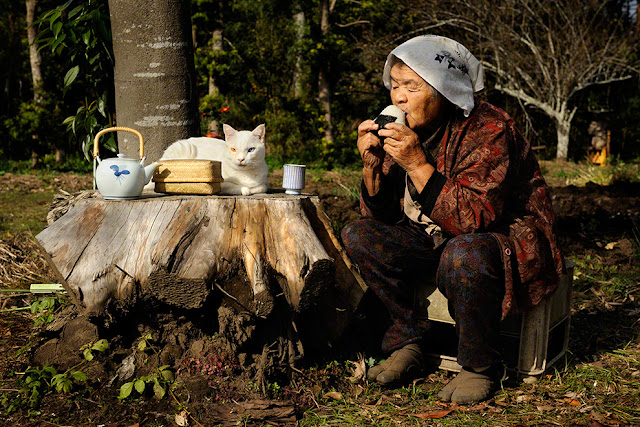 why i'm voting for barack obama

obviously, this is not a political blog.

but, today, i want to share why i'm voting for obama. 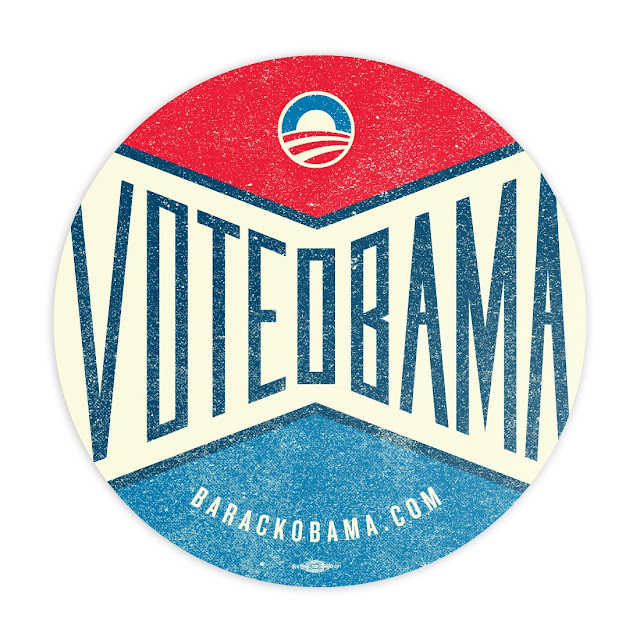 equality for alllll
this is a really big one! i'm still confused why people are so against equality...
by opposing this, you come off hateful.
by opposing this, you are not helping anyone.
there has always been and there always will be gay people, allowing someone who is gay to have equal rights, in no way affects your own rights...so why is anyone opposing this?
also, i have found that anyone i know personally, that is against equality, happens to not have any gay friends... maybe humanizing what you're so against, could help you see why fairness & equality are so important.

believes in fair pay for men & women
it's really hard to believe anyone would ever vote against this. why would any woman want to vote for someone who doesn't agree with fair pay for women?


tax cuts for middle class
(helping out the people that actually need the tax cuts, not cutting taxes for the rich who actually have the money to pay higher taxes)


pro choice
i don't want to seem like this is no big deal, b/c i know this is a sensitive subject for many, & especially for some of our family & friends who are christians.
one thing is, regardless of what i think is right for me,  i don't think it's really my business (or anyone, except for the person involved & their doctor) to make any medical decisions in a person's life.
secondly, with obamacare, so many more young women will have access to contraceptives (insurance will cover birthcontrol now) so really by preventing pregnancy, statistics show, this can lower the amount of need for abortion...obama's stance & actions are more pro life than the opposing side)

and lastly...
he's someone i think is a strong leader yet he is relate-able & honest.
unfortunately i can't say the same for the opposing candidate.

please comment if you'd like to add anything i've missed! if you're voting for the opposing candidate and would like to say something constructive, feel free to do so too.
at 2:36 PM

see ya at the flea!!

a. it's daylights savings...yay! [remember fall back an hour!]

b. we're at the ALAMEDA FLEA tomorrow SUNDAY NOVEMBER 4, in space G26. 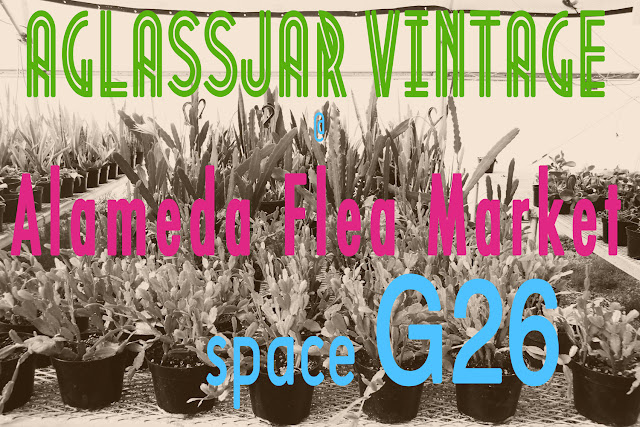 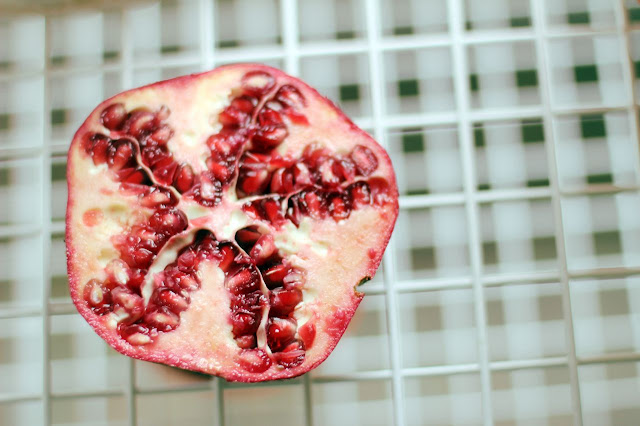 often for breakfast i make grapefruit juice, using the citrus juicer my mom gave me. (maybe one of my most used appliances!)
recently my brother in law brought us a huge bag of pomegranate, we ate a few, but still have a lot left. so then i got the idea to try & juice one, using the citrus juicer. it totally worked! i don't get a ton of juice, but still enough to really taste it, when combined with grapefruit juice.

i always wonder what people have for breakfast (well, & for every meal). so i'm sure you're dying to know what i have for breakfast......(probably not, ha)
i'll tell you anyway. some days i just have coffee, other times a tea tonic, but on my favorite kind of days,  i'm hungry for real breakfast!

side note:
i order this bread from julian bakery, because regular bread just isn't good enough for me -_- lol, kinda kidding. but,
i do really love their bread. it's delicious & they use sprouted grains (which cuts down the gluten & increases protein content) & they also have many vegan choices. 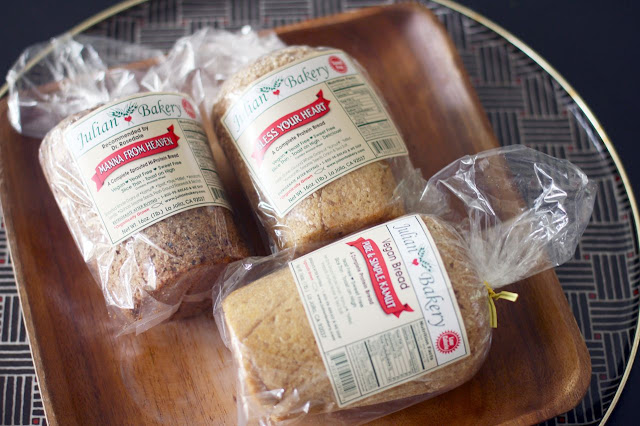 today for breakfast, i made a kale, chives & cherry tomato tofu scramble with  avocado toast. 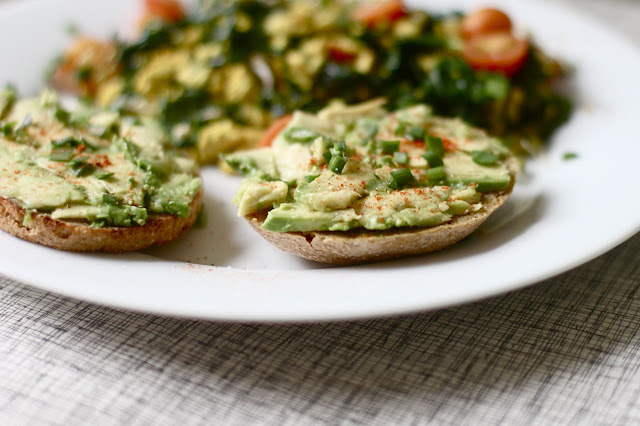 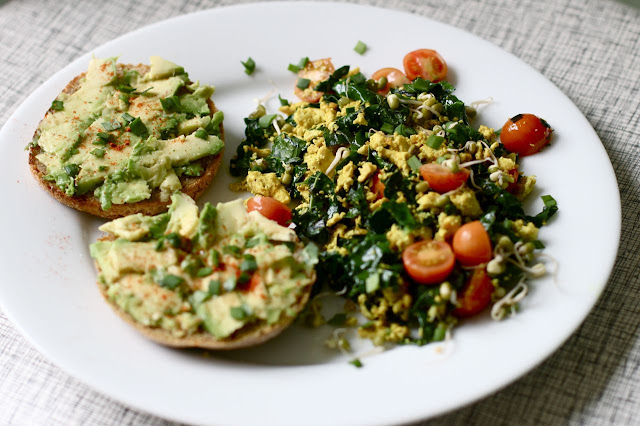 put a little coconut oil in your pan. as it heats up add chopped garlic & some chives. while that heats up, take a chunk of tofu, and crumble it with a fork (before this, you can press the tofu, to drain... but sometimes i skip that part & it still tastes good). as the garlic begins to brown, add the crumbled tofu. let it heat up then sprinkle a little sea salt & turmeric, mix to make sure all tofu is yellow. turn down the heat to low & chop up the kale (& red cherry tomatoes, if ya want!). put the kale in the pan, mix well, let it sit for 30 seconds & turn heat off. add remaining chives & some more cherry tomatoes. (i also added some mung bean sprouts i just sprouted, adds a little crunch, really good)

at this point, i let it sit there, while i make my avocado toast.

our niece & nephew came over, helped us decorate our place with spider webs & carved pumpkins.  we dressed up in costumes & exhausted ourselves trick or treating,

we have two spies and a pwinsess :) 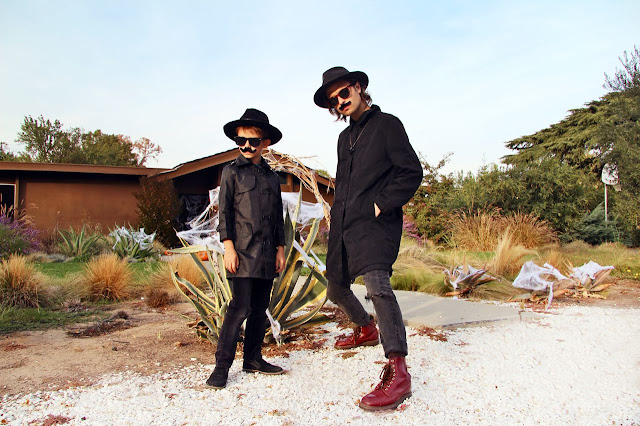 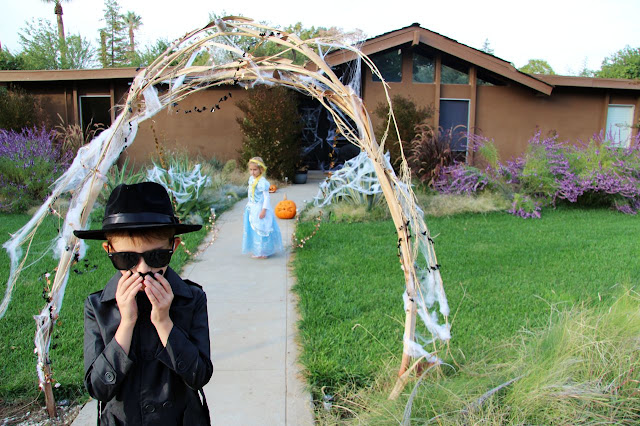 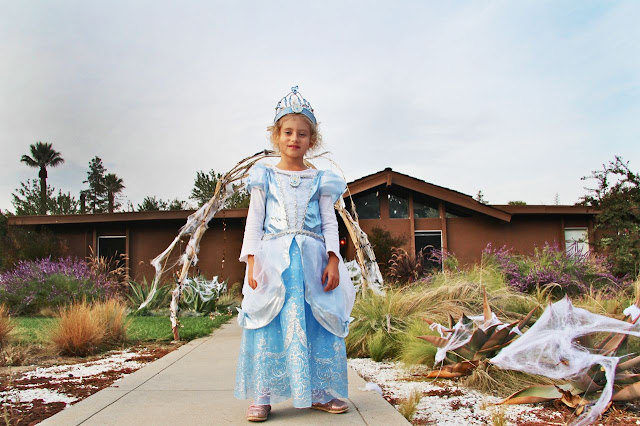 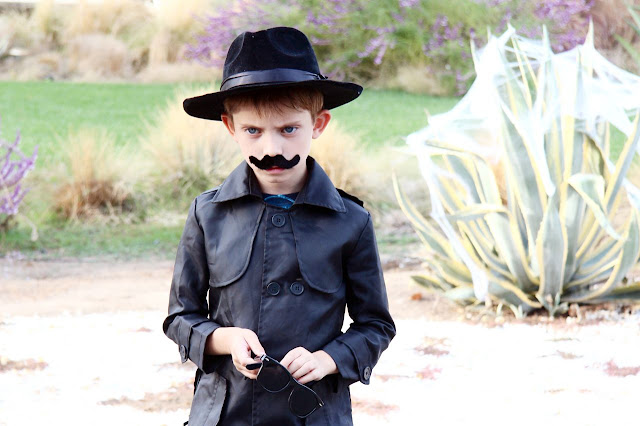 it was their first time t&t-ing, so it took a few tries to really get the whole "trick or treat" "thank you, happy halloween" down.  sometimes they would just ring the door bell & smile :)

my favorite quote of the night was this :

-Alicia "Trick of Treat"
-Person at the Door "well hello there, and who are you?"
-Alicia "Alicia"